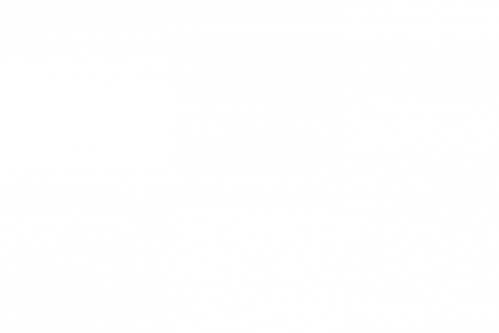 By Mark Markovina
Posted January 24, 2014
In Markovina Estate Events, Weddings
Technology and Nature are a marriage made in heaven2014-01-242017-09-19https://www.markovina.co.nz/wp-content/uploads/2017/05/markovina-logo.jpgMarkovina Vineyard Estatehttps://d1lger6vnu5u8d.cloudfront.net/beautiful_couple_on__wedding_day_499x333-1.jpg200px200px

A creative proposal combining nature and technology resulted in a superb wedding held at the Markovina Vineyard Estate.

It was a wonderful day enjoyed by everyone and was featured as
Wedding of the Week on
http://www.stuff.co.nz/life-style/weddings/weddings-of-the-week/9617851/Stuffs-wedding-of-the-week

People use all sorts of interesting and innovative ideas to ask their sweetheart to marry them. Some girls even propose to their guys!  But getting a proposal via Facebook is pretty imaginative!

This is how it was for the bride to be – Wafaa Humadi – she received her proposal from her beloved, Aylon Herbet, via a post on her partner’s work website.  How could she resist such a pubic and thoughtful proposal?  It was even more significant as they had originally met on Facebook.

The happy couple wanted an outdoor ceremony and we were privileged they chose us  to host their special day on our Estate surrounded by their friends and family.

From the feedback received the day was a brilliant success – stunning dress, witty speeches, heartfelt wedding vows, food of the highest quality and a stunning venue set in beautiful natural gardens that offered the perfect backdrop for some spectacular photographs.

Wafaa and Aylon describe this as the highlight of their wedding day. They wanted something informal and special – a ceremony that would tell their story. 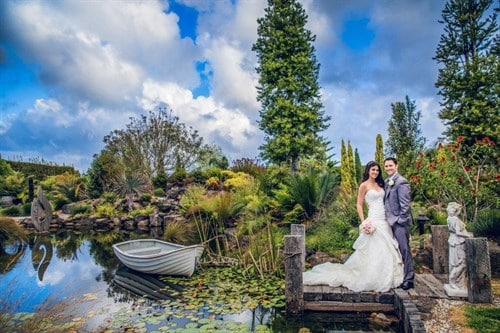 There was much laughter throughout the day (a sure sign everyone was having a wonderful time) and over and over again Wafaa and Aylon received many compliments saying it was one of the best weddings ever attended.

There was much oohing and aahing over the food which was superb and plentiful and the beautifully landscaped gardens of the Estate were appreciated by everyone who attended. Our praises were sung throughout the day and we felt very proud to be hosting such an amazing day.

The happy couple kick up their heels

One aspect of the day that was very different was the dancing. As soon as the happy couple entered the reception they started dancing and encouraged everyone to join in. Aylon is Jewish and Aylon Iraqi and they kicked off the fun with one celebratory song from each of their cultures. This really set the scene for the fabulous night ahead – as everyone was prepared to dance, party and celebrate. 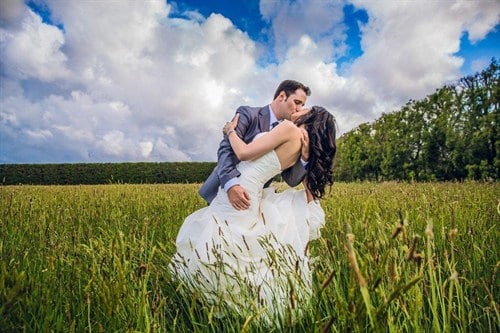 Everyone had said to Wafaa that the hardest part of organising a wedding was finding the prefect dress.  No problems here… the first one she choose from Jenny’s Bridal on Kyber Pass was the one she settled on and according to the guests at the wedding, she looked amazing…

It’s not a perfect day with a drama! And this one involved the
boys!

The suits they had chosen and booked several months earlier were not the same suits that were collected the week of the wedding. A mix up had occurred and there were a few moments of panic, but all was quickly sorted out and the boys turned out beautifully in their light grey suits. 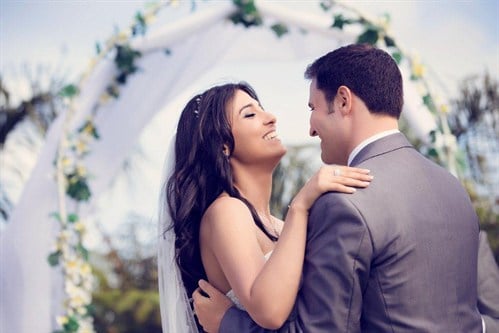 The original plan to live-stream the wedding to friends and family who couldn’t attend was thwarted five minutes before the bride showed up. However, the day was saved and the event was videod and recorded and posted on Youtube for everyone to see.

Pretty crucial to get this right? But a glitch at the last minute had the bridesmaid in a bit of a state saying to Aylon and the marriage celebrant that she didn’t have the ring! A quick backtrack and it was found in the hotel room – Aylon’s brother-in-law came to the rescue…

In such a beautiful setting there were many opportunities for some stunning shots from the photographer Dreamlife Photos
& Video.

But as often happens, the favourite image jumped out straight away – a picture of the happy couple standing in the field at Markovina Estate with Wafaa holding an umbrella. 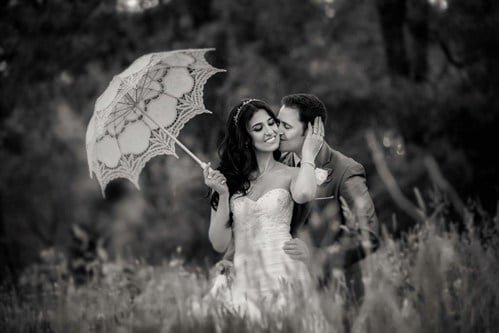 A captured moment depicting a wonderful day where everything was perfect!